Given the punchy quality of the analogue and PCM sounds of the Korg Volca Beats, I have long fancied adding individual outputs, for more processing, stereo panning and general sound control. Adding the outputs is fairly easy, if you have the right-size cross-head screw driver and a modicum of soldering skill, by following this guide:
https://www.instructables.com/id/Improve-Korg-Volca-Beats-with-Individual-Out-Mod/.

All is straightforward, apart from finding a decent connection point for the snare. Having already done the notorious Beats ‘snare mod’... https://www.gearslutz.com/board/electronic-music-instruments-and-electronic-music-production/907036-volca-beats-snare-fix.html 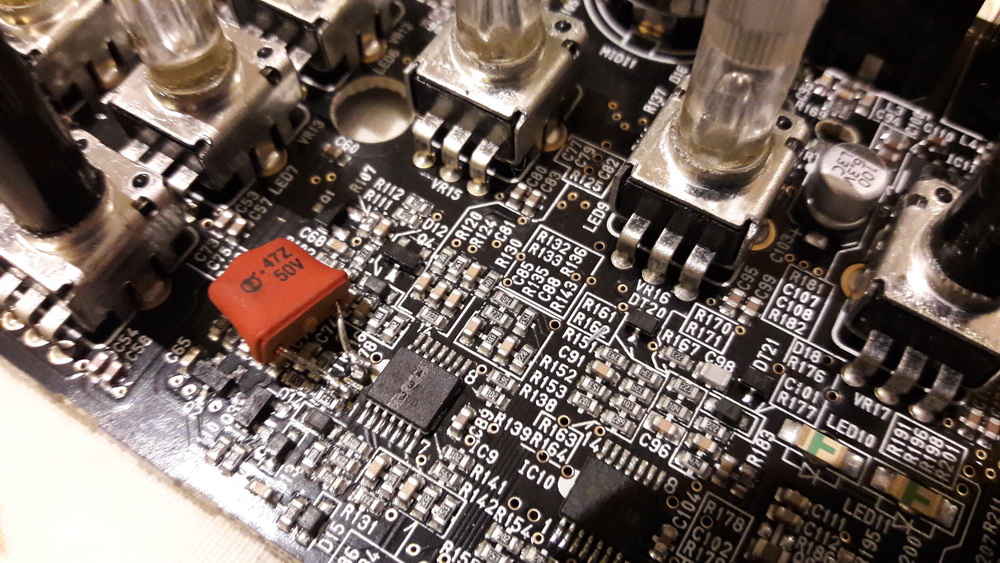 ...it was worth trying to find a way to isolate the snare sound.

Getting at the Snare

The suggested output point for the snare on the Instructibles page is very low in volume, resulting in too much background noise when turned up to a decent level. 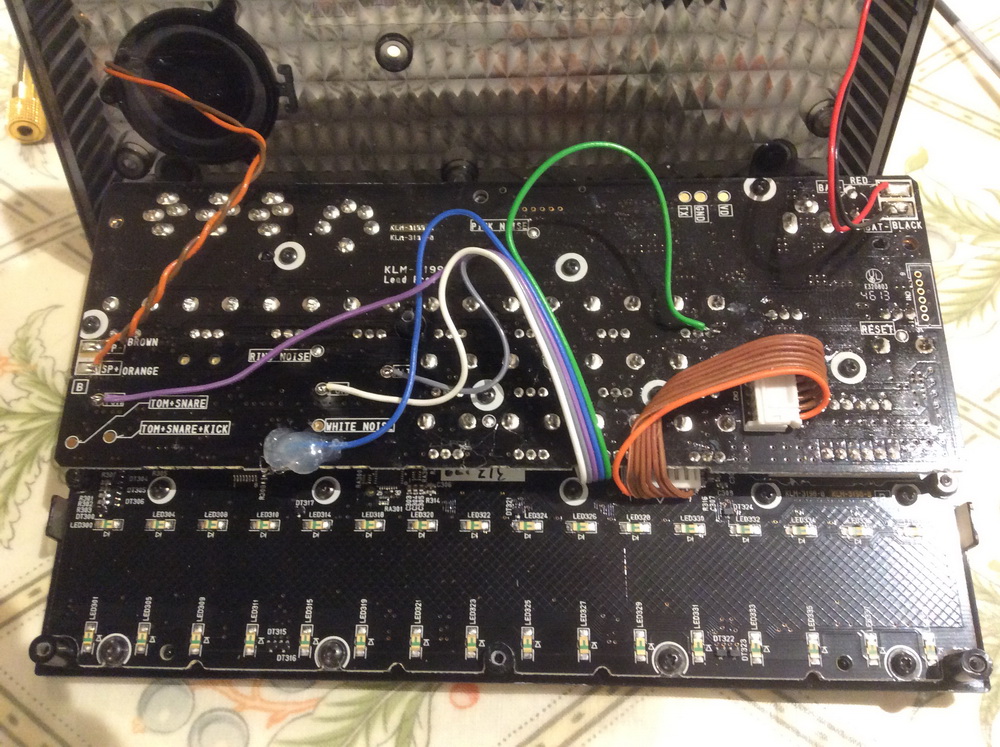 This was my first attempt at a snare output, with the tiny wire soldered and supported by hot glue to prevent it pulling out.

One of the comments below the main article suggested another tap point, which generates a decent volume, but adds a digital whine, so basically results in the same issue of a compromised, noisy snare output. 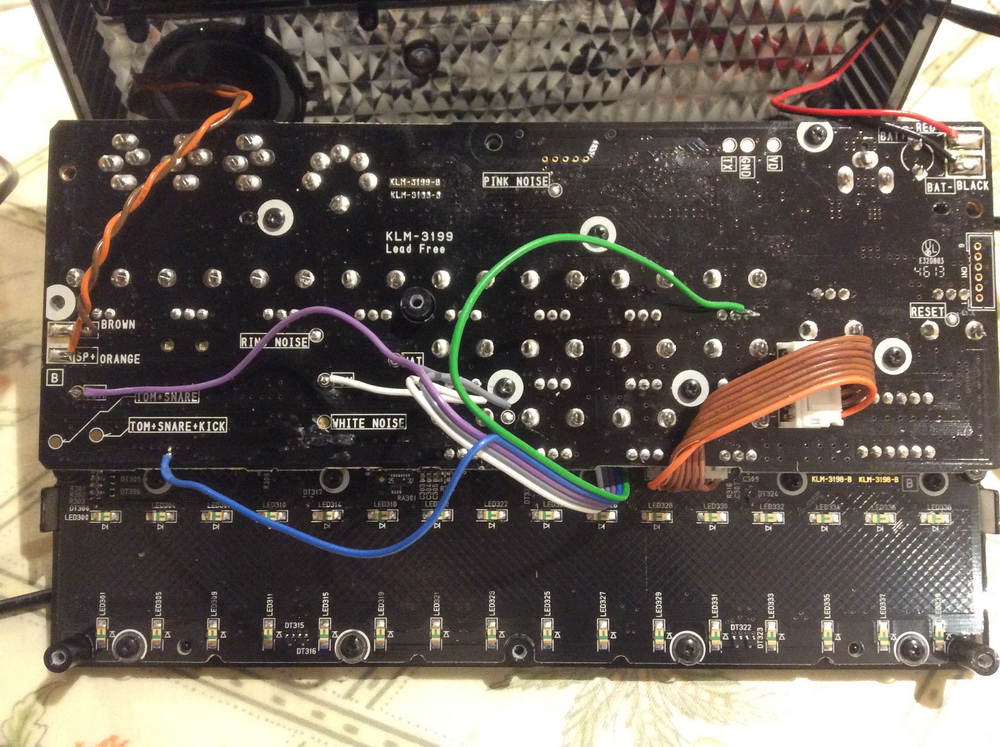 Second attempt to tap the Snare sound, based on one of the comments.

However, marked on the PCB is a tap point for Toms and another one for Tom+Snare, but annoyingly, nothing for Snare alone. Both of these points provide a good volume and clean signal.

After much head scratching, it occurred to me that it should be possible to combine the two signals (Toms and Toms+Snare) 180 degrees out-of-phase, and have the Toms cancel out, leaving only the Snare sound. In theory, any balanced line input will cancel out identical signals presented on the ‘hot’ (positive or tip) and ‘cold’ (negative or ring) connectors - this is basically why balanced cables eliminate interference noise picked up on a connecting cable. The same signal (the Toms) on both connections is combined and eliminated by being out of phase, leaving only the wanted signal. In this case, the signal we want is the Snare sound.

After some mucking about with splitter connectors... 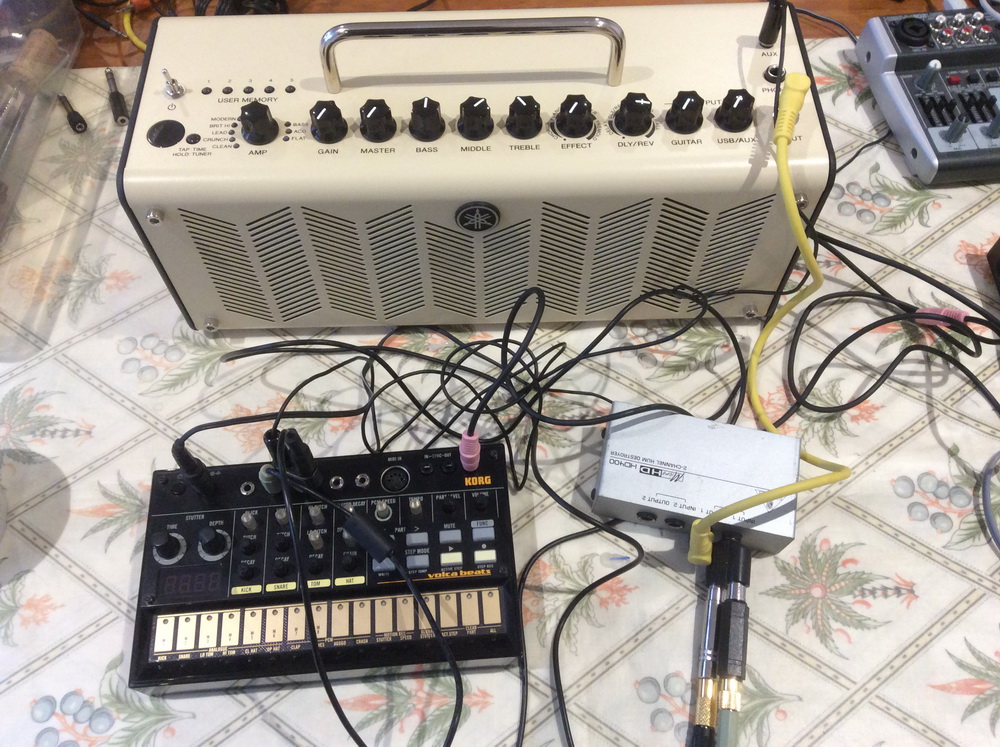 ...it was possible to confirm that a really clear Snare signal could be obtained by combining the Toms and Toms+Snare signals into a balanced input. Also that the Toms signal was left intact on the Toms connection, so the best of both worlds was possible. 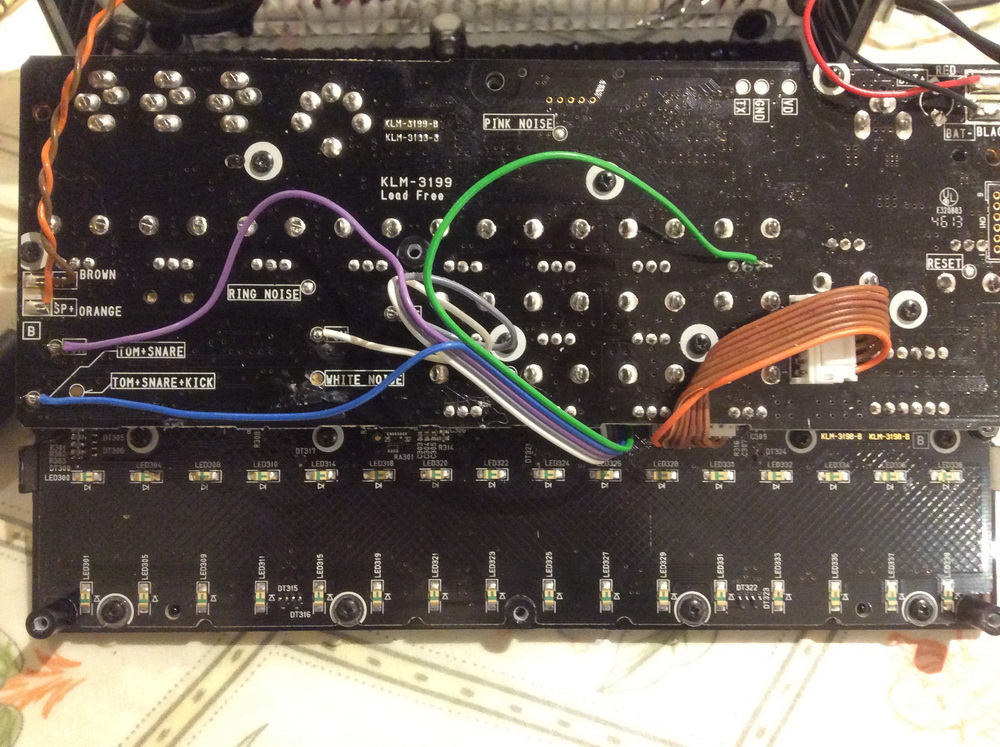 The way to implement this most easily within the Volca Beats is to have 3.5mm mono output sockets for all of the separate tap points, apart from the snare. For this, use a 3.5mm stereo output socket and wire the Snare+Toms connection to the tip, the Toms connection to its own mono socket AND to the ring of the stereo socket. That way, when a ‘stereo’ (TRS) jack is inserted into the TRS socket, it is carrying the Snare+Toms signal on the + connection and the Toms signal on the - connection. Plug the other end (via a 3.5mm to 6.5mm adaptor plug) into a balanced line input and, hey presto, you have a lovely isolated snare sound at that input. 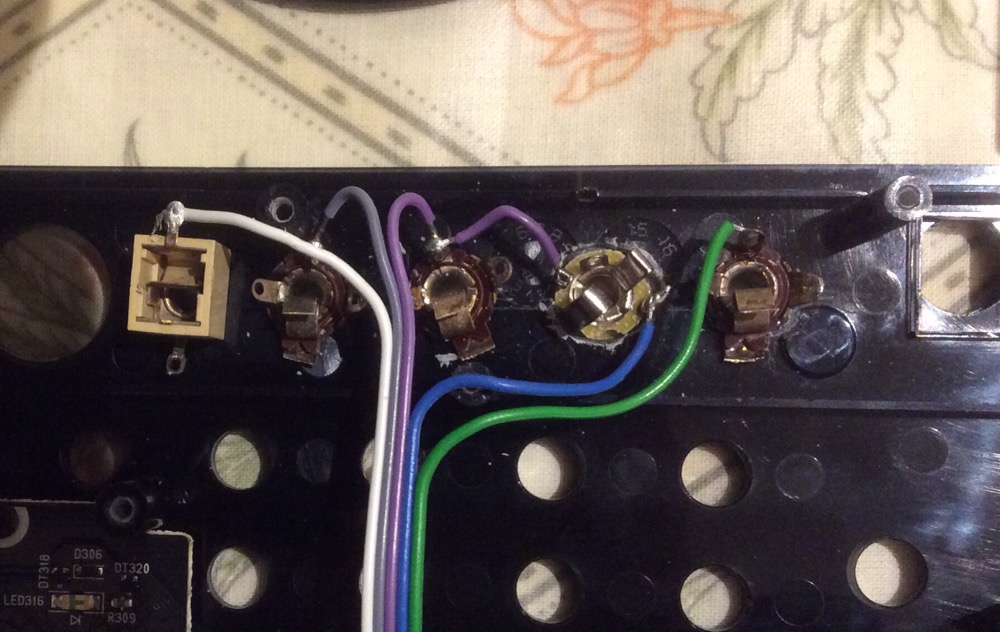 Rear of the output sockets. Note the second from right, which has the Snare+Toms signal (blue) going to the tip, and the Toms signal (purple) also linked to the ring. This provides a ‘balanced’ output for the Snare. The odd socket on the left is just that, an odd socket. The plastic casing had to be drilled to be made thin enough to accept the sockets.

The mixer I use for separate drum inputs is an old Tascam MM1, which has unbalanced inputs (and outputs) only, so it could not combine the ‘balanced’ signal into one channel in the way I needed. What to do? Any device with a balanced input can be placed between the modded Volca snare output and an unbalanced input.

Best of all, a diminutive Behringer HD400 ‘hum destroyer’ was sitting around unused and similarly, does not need power and can accept balanced or unbalanced inputs and outputs. This does the same job as the Art T8, but for just two ins/outs. Possibly not to the same sonic standard as the Art, but plenty good enough for the Snare output from my Volca - and small enough to easily be inserted into the signal chain. 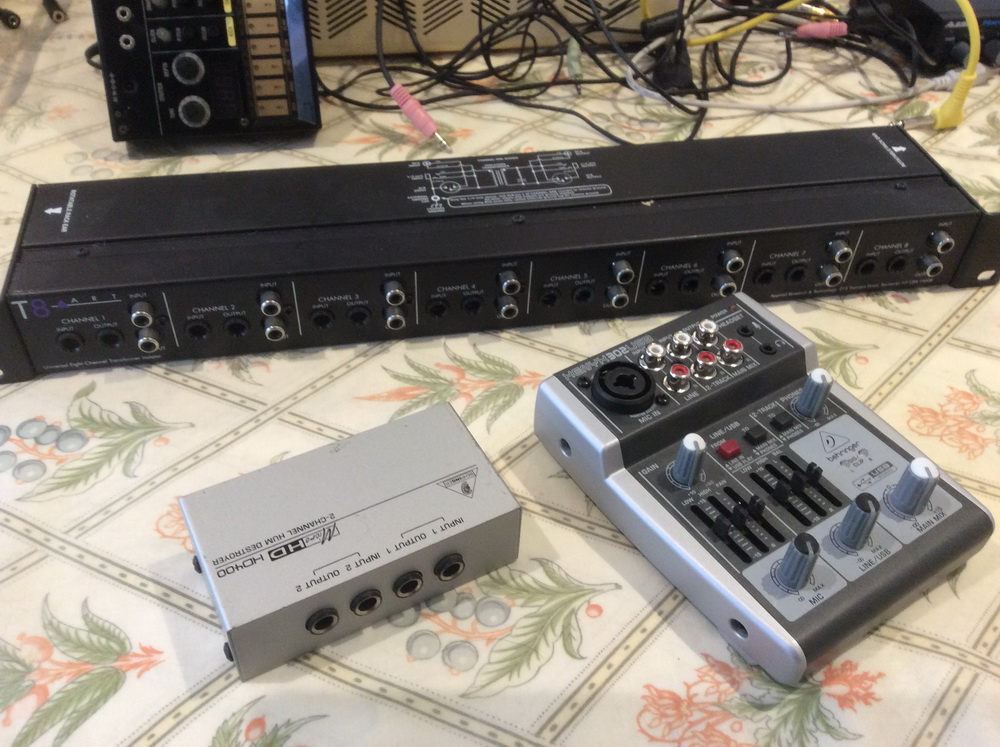 The instructables page suggests putting the sockets in the back of the case and connecting their earth to a common point on the PCB. I decided to fit the sockets to the top of the case for ease of access, not realising that not only is the top of the case a composite of plastic and metal, but that the metal is earthed. Using metal jacks, there was no choice but to allow the case to do the earthing. As far as I can see, case earth is not the same as the internal signal earth, so I was worried that, at least, some hum might be induced by this non-standard earthing on the new output sockets. In practice I have not noticed any issues at all. However, if you want to avoid any chance of earth issues, you might want to mount the sockets on the plastic rear panel as per the instructibles page. One little gotcha is that the case earth is not effective until the case is screwed together, so that all the parts make a secure contact - watch out for this if testing whilst the Volca is still in bits.

So, my Volca Beats now has separate outputs: TS for Kick, Toms, Hats and PCM; and TRS for Snare (running via the HD400) into five unbalanced channels of the Tascam MM1, which has decent level, pan and EQ on each channel plus 4(!) effects sends. Enough to get up to lots of sonic mischief, beyond what the single mono output of the Volca Beats would normally allow.

So, big thanks to ArvidJense for leading the way and publishing to instructibles.